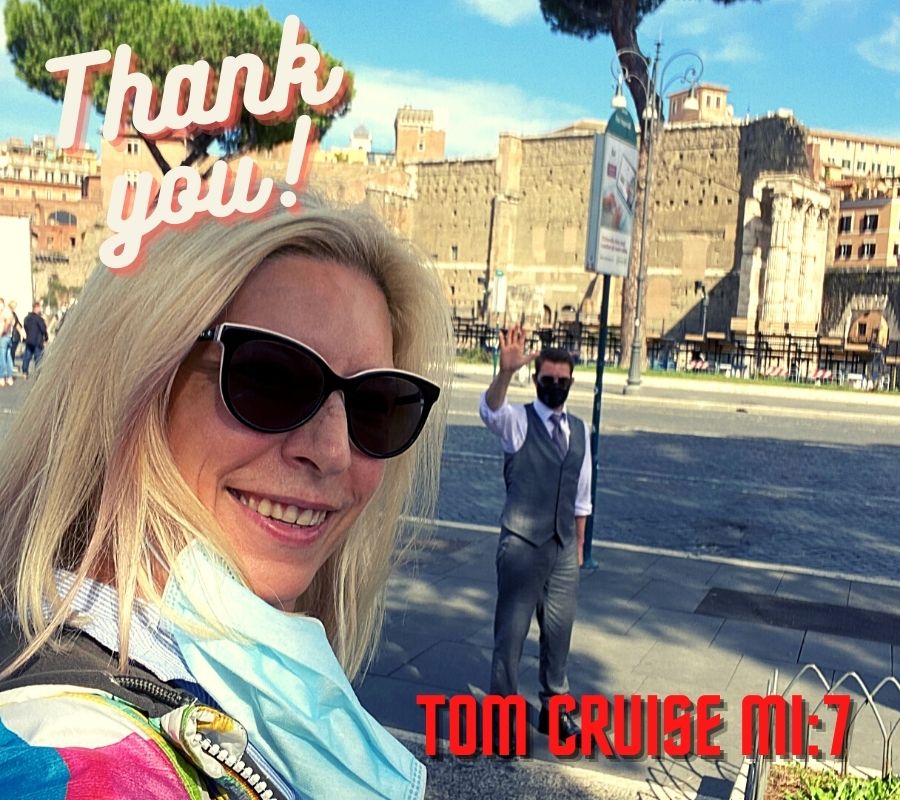 In these rainy, October days, Tom Cruise is in Rome to shoot scenes for the next episode of the “Mission Impossible” series, which will hit the movie theaters at the end of the next year – 2021. In this American blockbuster Tom Cruise is not only playing the main character – Ethan Hunt – but he’s also one of the producers, and the word is that it was Tom who insisted on having one part of the film shot in Rome.

It is wide known that Tom Cruise has a strong relationship with the Eternal City. In 2005 he stayed here while filming “MI:3”. It was probably then that Tom fell in love with Rome. The following year in fact Tom came here to get married to the actress Katie Holms. Even though the actual ceremony took place in the town of Bracciano, located just north of Rome, the couple spent a few days in Rome.

The shooting of “MI:7” was supposed to start in March this year (2020), but due to the Covid-19 pandemic, it was postponed and only now, in October, it is finally possible to start filming.

As you know, at the beginning of this year, Italy suffered greatly from the pandemic. It was Italy  that initially had the highest number of infections and deaths, and in the eyes of the world the country was labeled as the main infector.

This bad reputation deterred many tourists from coming to Italy this year and this caused an unprecedented crisis not only in the tourism industry but also in all the other related sectors. Many people who, as me, worked in tourism lost their jobs and, what was worse, lost their hopes for a better tomorrow.

This is why in my opinion the presence of Tom Cruise in Rome is so important. The actor with his team has been in Rome for over two weeks now. During all this time, he and his staff have been using many of the city’s services that until now (due to the lack of tourists) have been closed. They have hired many locals as extras, make-up artists, drivers, security staff etc. In addition, let us imagine the money that the production must have paid the city of Rome for the rights to film at the Coliseum, Imperial Forums, Venetian square etc. Not to mention the publicity the city will get once the movie is out. Moreover, as from now Tom shows the world that Rome is safe enough for him to come here and film.

This is the reason for which I personally wanted to thank Tom Cruise. Of course, it wasn’t easy considering that I was dealing with a superstar surrounded by dozens of bodyguards; but somehow, I succeeded. While walking down the Via dei Fori Imperiali, I saw the film crew shooting a scene, so I waited for them to finish and as Tom Cruise approached the barriers separating him from un, his admirers, I shouted: “Tom, thank you for coming to Rome during this difficult time! The actor seemed touched by my words, so he even agreed on taking a selfie with me. WOW! If you want to see what happened click here…

Other films that made Rome one the popular capitals of the world.

Sometimes we don’t realize the enormous potential of the film industry and how much good it can do for a city or country. In fact, I wanted to tell you the story of another film that long time ago transformed Rome into one of the most visited capitals in the world.

After the tragic – for Italy – period of World War II, the country had huge economic problems. Destruction, poverty and unemployment were everyday life. It was then that Hollywood rushed to help Italy and especially the Rome.

In 1953, director William Wyler picked Rome as the set for his film “Roman Holiday”. It’s the story of a young princess named Anna, who comes to Rome for a short visit. Unfortunately, during her stay in the Eternal City, Anna is under the constant supervision of her guardian, who doesn’t allow her to go out to explore the magical and unique atmosphere of Rome. One evening however, the princess escapes from “her prison”, but gets lost in the city. Fortunately, during her escapade, she encounters a handsome American journalist named Joe Bradley, who takes care of her and provides her with a unique Roman vacation.

In America, the film became a blockbuster, partly because the main male character was played by the superstar Gregory Peck. On the contrary the female part of Princess Anna was assigned to a young still unknown at the time actress Audrey Hepburn, who shortly thereafter was to conquer Hollywood.

The film showed the world that Rome was beautiful, undamaged by war and, above all, safe. In fact, if a young princess could get lost in Rome at night without anything happening to her, it meant that also tourists could come here with no fear.

If you haven’t seen this movie, you absolutely must watch it, and if you’re coming to Rome, we recommend touring the city with our guide experiencing a truly Roman Holiday … See you in Rome!